Home » Natural Ingredients » What Is Chamomile?

A study found that the combination of Angelica Sinensis and Chamomile could reduce hot flashes by up to 96 percent. Chamomile has been used as a traditional medicine for thousands of years for many health concerns including calming anxiety and nausea due to unsettling stomach concerns. Although Chamomile is known worldwide, it is most commonly used in the U.S. as an ingredient in herbal tea. Chamomile contains chemicals called flavonoids and these flavonoids are a type of nutrient present in many plants. They each play a significant role in chamomile’s medicinal effects on women suffering from menopausal and PMS symptoms.

What Is The Proper Dosage?

What Is Chamomile Used For?

Although the list of uses is a long one, chamomile is most commonly used to help reduce nausea, insomnia, menstrual pain, inflammation, and anxiety.

Reducing menstrual pain is one of the main uses of Chamomile. Many studies have linked chamomile tea to reduced severity of menstrual cramps. A 2010 study, for example, found that consuming chamomile tea for a month could reduce the pain of menstrual cramps. If you are not one who likes tea, you can take this in the form of a capsule a few days before your menstrual cycle and notice a difference in symptoms as well. Women who take chamomile regularly have noticed a reduction in anxiety and distress associated with period pain. Reducing inflammation is linked to chamomile as inflammation is an immune system reaction to fight infection. Chamomile tea contains chemical compounds that may reduce inflammation with the proper dosages. As many women know, insomnia may come from menopausal symptoms and or premenstrual symptoms therefore Chamomile is widely thought to help people relax and fall asleep due to insomnia. This herb is calming and soothing which can not only help with sleepless nights, but hot flashes as well.

Can You Take Chamomile In Combination of Other Herbs?

Chamomile is safe to take with other herbs, in fact a study found that the combination of Dong Quai other known as Angelica Sinensis could reduce hot flashes by up to 96 percent. That is a high percentage for women to experience without having to take unnatural medicines. Chamomile is an herb that has been consumed for centuries as a natural remedy for several health conditions If you are one who likes to make your chamomile in the form of tea, you can add ginger to reduce nausea. One of the most common and underrated symptoms of menopause is nausea, which chamomile has been proven to reduce. A large number of women suffer from nausea and hot flashes, so adding chamomile and ginger root into your diet may help alleviate any of this discomfort. 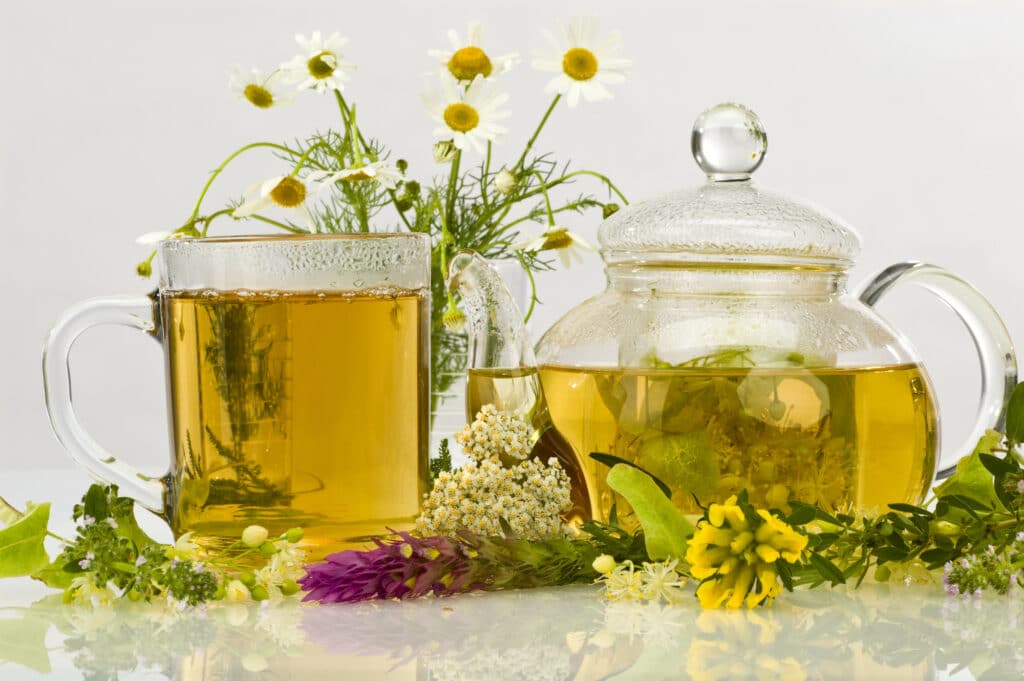 Chamomile has some unique properties that may benefit the quality of your sleep.  Chamomile contains an antioxidant called, apigenin which can affect certain receptors in your brain that may promote sleepiness and reduce insomnia. With Chamomile being an ingredient in Bust Bunny Hormonal Balance capsules, most women will see a noticeable change in their symptoms for menopause and PMS. The herb is natural and is considered safe by the FDA (it is listed on their Generally Regarded as Safe list, or GRA). Chamomile has been used to effectively assist women for many years.
Select your currency
USDUnited States (US) dollar
EUREuro
CADCanadian dollar
AUDAustralian dollar
GBPPound sterling